The Eureka Power Plush cordless vacuum is so named because of its soft roller cleaner head which is a great new technology, which subscribers of this channel know I really love, especially for hard floors. And Im glad to see soft rollers on more and more vacuums.

It comes with a pretty decent attachment package including a crevice tool, an upholstly tool slash dusting brush and a wall mount which can hold the two attachments.

On hard floors we found that it was beyond excellent, picking up everything we put down, like fine debris, including the very difficult to pick up sand, It also did flawlessly with pet hair and small to extra large debris. If you have hard floors of any type you really should try a soft roller vacuum like this Eureka, I really think it is the future of vacuum cleaner technology.

On carpets there was a bit of a downgrade, it did pick up all the debris in the test, from fine debris to pet hair to large debris but you shouldn’t expect much deep cleaning of the carpet since there is no standard brush roll to agitate the carpet, so its going to leave hidden debris at the bottom of the carpet. There is also a notable drop off in maneuverability on carpet, its not terrible but its nowhere near as easy to use as it is on hard floors.

Dyson solved this problem buy offering a different cleaner head that you could switch out for carpets, and Shark solved the problem by integrating a standard brushroll with the soft roller, but with the Eureka Power Plush they just widened the base a little bit making it at least feasible to use on carpets for surface debris, but if you have mostly carpets in your home this isn’t the vacuum for you.

As far as suction and airflow we found that its suction power was about 38 inches of water lift and its airflow measured about 30 cfm at the wand and 25 cfm at the cleaner head. For context that is a little more than the Dyson V8 or Dyson V10 on Low power, but quite a bit less than both on their High power mode.

Since the Eureka only has one power mode you might think of it as being a little less than the medium power on the Dyson V10.

I would rate its performance on the crevice pickup test as being in the top 5% of vacuums, which shows that it has good airflow and a very good seal with its cleaner head design. All that to say that it has more than enough power to pick up anything you need to.

The dust bin volume was pretty good for a cordless vacuum. At almost 2.5 cups It can hold about a half a cup more debris than the Dyson V8.

I did find that the standard dust bin release wasn’t that great as it did seem to require a bit of work to get everything out, but on the plus side it has something I haven’t seen before, which is a secondary way to empty the bin by twisting off the container which allows you to access any stuck debris. In addition I love how you can fully disassemble the interior to expose the internal filters which are washable. And it is a very good idea to keep these areas free of debris to maintain airflow.

Before we get to battery life I should say that I like how the battery is so easily removable and I wish more cordless vacuums would do this. Theoretically you could buy more of these batteries for a longer cleaning time but I haven’t found anywhere that sells them yet.

So with the battery life tests we found that it ran 19:11 with non powered attachments and 18:12 with the cleaner head attached, which many customers say is enough to vacuum their homes but you might consider timing how long it takes you to vacuum your home to see if 18 minutes is enough.

I should mention that the trigger is interesting in that you don’t have to hold it down but rather just touch it once to turn it on and touch it again to turn it off.

As far as ease of use and weight, it only weighs 5.5 pounds and it is very lightweight when vacuuming in normal mode or in its stair mode. But I did find its weight distribution was not nearly as good as the Dyson V8 when using it as a handheld vacuum despite them being almost identical weights. In other words I would prefer the V8 if I was doing a lot of free hand vacuuming like for cobwebs on the ceiling.

But on hard floors it really shines as it has a great two point swivel and it generally is very easy to use.

We are a participant in the Amazon Services LLC Associates Program, an affiliate advertising program designed to provide a means for us to earn fees by linking to Amazon.com and affiliated sites. 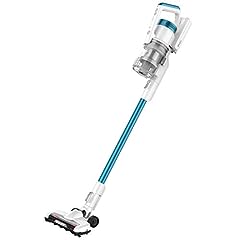 Efficient Cordless Cleaning: Powered by the latest motor technology the Rapid Clean makes cleaning convenient and thorough 40 Minutes Long Lasting Runtime: Up to 40 min of fade-free runtime. Easily switch to MAX power on fingertip controls to increas... (as of November 26, 2020 - More infoProduct prices and availability are accurate as of the date/time indicated and are subject to change. Any price and availability information displayed on [relevant Amazon Site(s), as applicable] at the time of purchase will apply to the purchase of this product.) 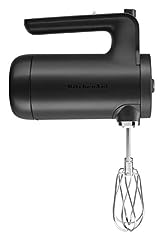 Make up to 200 cookies on a full charge. Based on 4 batches of chocolate chip cookies. Rechargeable Lithium Ion Battery delivers optimal run time and performance. Battery Indicator Light signals when it is time to charge the battery. "Easy to charge ... (as of November 26, 2020 - More infoProduct prices and availability are accurate as of the date/time indicated and are subject to change. Any price and availability information displayed on [relevant Amazon Site(s), as applicable] at the time of purchase will apply to the purchase of this product.) 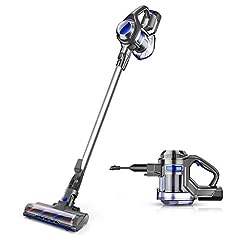 (13743)
[Super Long-lasting Battery & Powerful Suction]: Outstanding 20-28mins CORDLESS running time ensures thorough cleaning all around the house. The upgrade version provides 120-watt powerful suction to meet every cleaning demands, picks up debris and du... (as of November 26, 2020 - More infoProduct prices and availability are accurate as of the date/time indicated and are subject to change. Any price and availability information displayed on [relevant Amazon Site(s), as applicable] at the time of purchase will apply to the purchase of this product.) 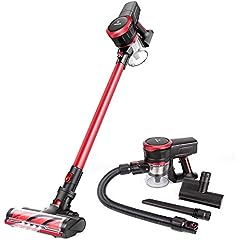 [Upgraded brushless motor]: With 800hrs life expectancy, 5times longer than ordinary brushed motor with 150hrs, providing high capacity of strong power. Meanwhile provides 2 power modes, standard 11kpa, 23kpa suction in MAX mode. [4 Stages High Effic... (as of November 26, 2020 - More infoProduct prices and availability are accurate as of the date/time indicated and are subject to change. Any price and availability information displayed on [relevant Amazon Site(s), as applicable] at the time of purchase will apply to the purchase of this product.)

Vacuum Wars – Do you know if Shark is getting ready to revamp their DuoClean to address one of the major complaints: battery placement (makes it unwieldy/awkward/heavy for the handheld vacuuming). I’m really interested in the Duo but the complaints about this have me a little scared to sink the money…

Can’t really compare it to the Dyson since it’s so much cheaper. I for one would love an attachment that cleaned both bare floors and carpet well. I have both, and being the rushy / lazy person that I often am, I don’t often use the Dyson fluffy tool on my V8. I still love that Dyson, but must admit the bin is a little small. I wouldn’t mind that Eureka power button either.

Please do the rollibot puro 200b cordless vacuum

Can you do a henry hoover?

You should do a review on a Hoover Air Canister

That really is trying to copy the Dyson V8 with the fluffy head, and it would not surprise me if Sir James has not considered sueing Eureka for copying the design of his fluffy head. At least Shark had the sense to combine their fluffy roller with a brushroll for carpet all in the same head (the Duo Clean), so the machine could clean carpets as well as hard floors. In its current form, the PowerPlush would really only be suitable for homes with all hard flooring, or bought solely for use on hard floors. The filtration looks pretty bog standard with just a sponge filter, so this is going to need a lot of cleaning and maintenance to that filter, or suction will be lost quite rapidly.

that vacuum should have come with a carpet head

What will your next vid be about?

Can you guys do a review of the eureka floor rover

Rescind that single dislike, whoever you are.

That’s it this guy is out of him one smart

Great video once again! I bet if they offered a regular brush roll it would be a much better value and Interchangeable batteries should be standard for cordless vacuums.

BTW have you noticed Eureka only offers 3 models in their website now? They even discontinued the The Boss (1934b)

Thank you!! I have a dyson animal and couldnt justify purchasing the v8 or v10 just for a few hundred sq ft of hard floor. I think you found me my new hard floor vacuum!!!

Is this vacuum a sealed system

Vacuumwars great video. I made a video on my channel if you want to see it.

This reminds me of a certain other popular vacuum brand.